What is an indica?

There are over 2,000 different strains of cannabis. These are split into 3 distinct groups, indica, sativa and hybrid. So what is an indica?

Cannabis forma indica or simply indica is one of the plants of the cannabis family. It is often (although by no means universally) cultivated to create hashish and often it has higher CBD levels than sativa. This larger amount of CBD contributes to the fact that indicas often have a more stoned feeling than sativas, which often give a high feeling. It is important to know the differences between sativa and indica as it will help you make a decision on which strain to smoke for your specific reasons. For example, if you're feeling very anxious and would like to calm down you should smoke a nice sedating indica. Conversely, if you were to smoke a strong, heady sativa in this situation you may find it exacerbating your anxiety. Some people have tried weed before and don't like it because they felt too overwhelmed. This is probably because they smoked a very skunky, strong sativa when what they would have actually preferred is a calming indica.

The difference in sativa vs. indica highs

The main difference between the two highs is where they hit you. Where sativas often hit the mind and leave your brain whirling, indicas will often leave your body feeling heavy and relaxed. A nice body-heavy indica is often exactly what's needed after a long day to help unwind and relax. They can be useful for a number of medical problems, however, this is also extremely strain reliant. Indicas are most commonly associated with: relieving body pain, relieving spasms, reducing seizures, relieving stress & anxiety and relaxing muscles. The plants themselves are also slightly different, indicas are normally shorter and bushier than sativa plants. There is some debate as to whether or not indica plants and sativa plants are even the same species, what is certain is that both offer significant medical help when used properly. 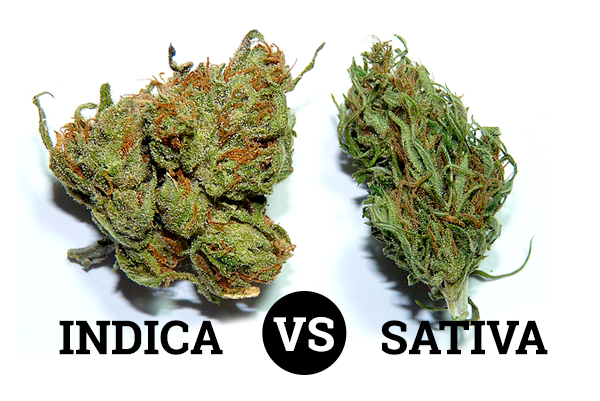